My last two posts have mainly focused on the internal world (thoughts) of the wealthy. Success, however, is a combination of our attitudes (internal) and our habits (external).

Before I go any further into today’s post, I want to clarify a few things:

If you would like to be better off in the future than you are now, however, this post, and my previous two posts, should help. 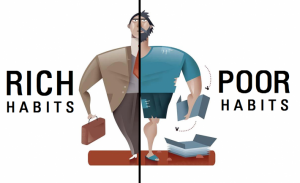 My post today is based on some great research that Tom Corley has done. He spent five years studying the habits of the wealthy and the poor. Tom’s family was wealthy until he was about 10, then they lost everything overnight and lived in poverty the next 11 years. Tom didn’t want to live this way – he wanted to know exactly what wealthy people did to become and stay wealthy. Here are some key findings from his five-years of research:

There are other habits as well, but these seven are a good starting place. If you were to pick one or two of these to begin focusing on, what would you choose?

My plans are to work on:

I would love to hear what area you are focusing on – please leave your comments below!

3 comments found on “Habits of the Wealthy”